"For many years DOCS faculty has recommended the use of preoperative anti-inflammatory medications to reduce postoperative pain following invasive procedures. This study lends further evidence to support those recommendations.

The drawback of COX-1 inhibiting NSAIDs may be overcome with the use of COX-2 inhibitors such as etoricoxib. Being a second-generation NSAID, etoricoxib has 10 times greater selectivity for COX-2 than COX-1. Besides providing effective pain relief following various dental procedures, etoricoxib is a safe drug with minimal adverse effects.

Recently, a clinical trial was conducted by researchers at Wuhan University and the Suzhou Vocational Health College, China, to evaluate the efficacy of low-dose etoricoxib to prevent postoperative dental pain. The results of this clinical trial were published in BMC Oral Health in 2021 and revealed very interesting findings that support the use of etoricoxib for postoperative dental pain management.

In this article, we present a summary of the findings of this clinical trial.

In this randomized controlled trial (RCT), healthy patients were recruited to undergo the extraction of vertically impacted third molars. The inclusion and exclusion criteria were as follows: 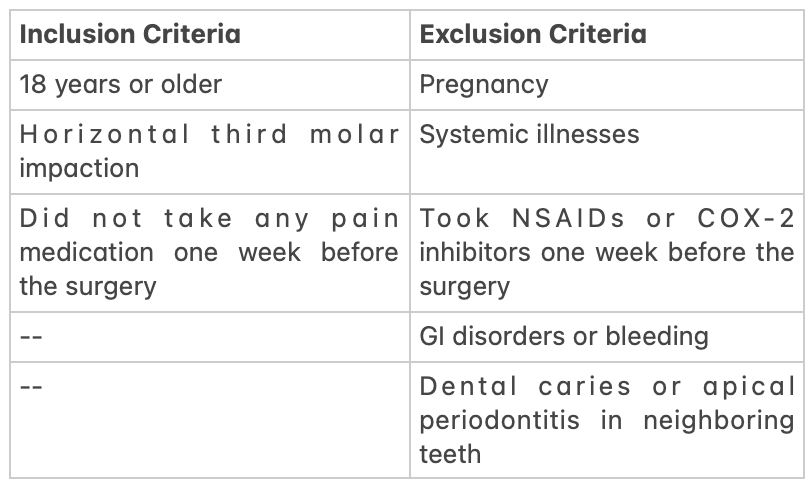 A total of 56 patients were randomly allocated into two groups; 28 patients received etoricoxib (60 mg), while the other 28 received placebo treatment.

Prior to the third molar extraction surgery, anesthesia of the inferior alveolar, lingual, and buccal nerve blocks was administered with 2% lidocaine, while infiltration anesthesia was given using 4% articaine and 1:100,000 epinephrine to minimize perioperative bleeding. To reduce bias, both the groups received the same surgical treatment.

First, the buccal mucoperiosteal flap was raised, followed by alveolar bone removal and sectioning of the tooth. Once the tooth had been extracted, the remaining alveolar tissue was scraped off, and the socket was cleaned with sterile saline solution. Finally, the flap was replaced and sutured using 4-0 silk, removed 1-week post-operative.

During the clinical trial, pain levels in the patients were recorded using a visual analog scale (VAS) from 0-10; 0 being no pain, while 10 being miserable pain. The pain levels were measured at 11 timepoints: 2, 4, 6, 8. 12, and 24 hours after the surgery. If a patient experienced a VAS score above 3, they were prescribed an emergency analgesic (Ibuprofen) and asked to record how many tablets they took.

Overall, there was a statistically significant difference between the mean VAS score of patients who had received placebo vs. etoricoxib until the first 12 hours – implying the efficacy of etoricoxib in preventing postoperative surgical pain. Similarly, the highest mean VAS score for both groups was observed at 4 hours after the surgery; 2.1 ± 1.64 for etoricoxib, and 4.5 ± 2.5 4 for the placebo group – both within moderate VAS pain score levels. However, VAS pain scores then continued to decrease gradually afterward. Interestingly, the results also showed that over 71% of the patients administered with etoricoxib did not take the emergency pain medication, and the interval of time to intake ibuprofen in the etoricoxib group was longer than that in the placebo group.

Inadequate pain relief following third molar removal is associated with significant deterioration in the quality of life of dental patients (Averbuch & Katzper, 2003). Pre-emptive analgesia administration is a safe and effective method in preventing postoperative pain following surgical procedures (Van Backer et al., 2018). The findings of this study showed that etoricoxib could significantly reduce postsurgical pain compared with placebo treatment. Hence, the use of COX-2 inhibitors such as etoricoxib may be recommended for pre-emptive pain management following dental surgical procedures like extractions or periodontal surgery without the risk of adverse effects, unlike COX-1 NSAIDs or opioids.

Author: Dr. Mehmood Asghar is a dentist by profession and an Assistant Professor of Dental Biomaterials at the National University of Medical Sciences, Pakistan. Dr. Asghar received his undergraduate and postgraduate dental qualifications from the National University of Science and Technology (NUST). He is also currently pursuing a Ph.D. in Restorative Dentistry from Malaysia. Apart from his hectic clinical and research activities, Dr. Asghar likes to write evidence-based, informative articles for dental professionals and patients. Dr. Asghar has published several articles in international, peer-reviewed journals.