Dental Case Study #203: Which anti-anxiety medication would you prescribe for this 25-year-old patient?

A dentist in South Carolina recently turned to our members-only EliteDOCS forum seeking advice on the best anti-anxiety medicine to prescribe a patient. The catch: the patient - the son of the dentist's hygienist - requested the prescription to calm his nerves ahead of an upcoming flight to Miami - not ahead of an upcoming dental appointment.

“I have a 25-year-old patient of record. He has no significant medical history and is on no medications. His most recent physical was within the last 12 months.

He called and asked if I could prescribe him "something to relax him and take the edge off." He lives about 30 minutes from the airport and will be driving himself. The flight takes about two hours.

My thought is that I can prescribe him Zaleplon since it is short-acting and the sedative effects should have worn off by the time he lands if he takes it about 45 minutes to an hour before his flight.

I would love this group's feedback on what medication would accomplish his goal of "taking the edge off" and also would be out of his system quickly, with no after effects.”

How would you advise this dentist?

I would not do this. You have no dental reason why you are prescribing this medication. I understand wanting to help, and your familiarity with this patient, but where is the line? Protect your license and yourself by not doing anything.

I strongly agree with Dr. Carroccia. It is not within the scope of dental practice to prescribe anything for anyone who does not have a documented dental diagnosis. You would be risking your career and dental license if there would be any adverse outcome, no matter how insignificant. In short, this is illegal. Don't do it.

The easy answer is "no," don't write this Rx.

Dentists are only allowed to prescribe drugs within the scope of dental treatment for their patients of record. While Zaleplon is a valid dental sedation medication, relieving your hygienist's son's flying anxiety is clearly outside the scope of dental practice, even if he's a patient of record.

The scope of practice for dentistry is much narrower than that of medicine. Whereas a physician could prescribe a sedative for his/her patient-of-record's flying phobia, a dentist cannot, even in good faith.

“Prescribing outside the scope of a dental license is
widespread, but there are severe and multiple
consequences for doing so.”

More than ever, pharmacies are cracking down on the prescribing practices of dentists. However, many of these cases are clearly overreaching by the pharmacists. Over the last few years, several DOCS members have brought to my attention that their local pharmacy refused to fill a patient's Rx for a dental procedure. The pharmacist would claim that Triazolam is a sleep aid and not indicated for use as a dental sedative. That's just plain ignorance on the part of the pharmacist. They know that many drugs have valid off-label uses. A well-known example, Viagra didn't start out as an erectile dysfunction drug; it was originally a blood pressure medication.

Prescribing outside the scope of a dental license is widespread, but there are severe and multiple consequences for doing so. First, and most obvious, is the potential for suspension or revocation of your DEA license. Second, would be action taken against your dental license by the state board. Third, is a lawsuit if something unfortunate happens because of the drugs you prescribed.

In this specific instance, the dentist's patient was planning to drive himself to the airport, and then take the Zaleplon, both outbound and on the return trip. DOCS faculty and I are adamant that patients never drive themselves when medicated. What if he gets in an accident? Then this doctor's good deed will be punished, as good deeds frequently are.

At least this member conducted a health history. And here's an excellent example why: A good friend told me about an environmental services employee who would come to his ED with a cough asking the docs for an antibiotic prescription because he was a smoker. Everyone wanted to be helpful and gave him an Rx.

The problem was that no one actually knew how often he was getting prescriptions (nothing documented in the EMR because he was never officially a patient) and no one considered working him up or even asking a few questions. The docs were just trying to be helpful.

The problem came when the "patient" did finally see a doctor and got a chest x-ray. By then he had advanced metastatic lung cancer, which ultimately took his life. Before dying, he sued every doctor who had "helped him" by giving him a script without properly evaluating him. It wasn't hard to get a record of all the docs because literally every prescription we write (that is filled) is recorded in a data bank. Though I don't think I would worry much about malpractice if I wrote a script for Zofran for my neighbor, your malpractice policy probably doesn't protect you from this kind of "hallway medicine."

Clearly, the potential for negative outcomes outweighs the benefits of writing prescriptions for friends and family. Best practice is to refer them to the appropriate medical colleague for proper intake and diagnosis.

I appreciate your frank and honest comments. That little voice in my head said something similar. He is just such a nice kid, and my hygienist said he probably would not get on the plane without something to take off.

Do you have pharmacology, protocol, practice management, equipment/drug, or regulatory questions you'd like answered? Likewise, would you like to lend your voice and experience to help fellow dentists from around the country?

EliteDOCS forum members are connected to one another - and to our faculty - 24/7. There are always friendly and knowledgeable fellow dentists online who are happy to respond to requests for advice and support.

To join our DOCS Education community of professionals serving at the forefront of dentistry, and receive all of the privileges to which membership entitles you - including access to EliteDOCS - visit us online here, or contact Lindsay Olsen, our Membership Director, at 206-812-7712

* EliteDOCS posts and replies are edited for clarity. 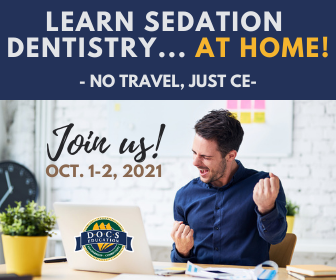