Dental Research Wins The 2021 Nobel Prize for Physiology or Medicine

Seen as breakthrough discoveries, two researchers funded by the NIDCR win the 2021 Nobel Prize in medicine for discovering the genes responsible for how temperature and touch are initiated and perceived.

On October 4, 2021, the Nobel Prize in Physiology or Medicine was awarded to both David Julius, Ph.D., professor and chair of the Department of Physiology at the University of California San Francisco, holder of the Morris Herzstein Chair in Molecular Biology and Medicine, and Ardem Patapoutian, Ph.D., professor of neuroscience at the Scripps Research Institute in La Jolla, California and a Howard Hughes Medical Institute investigator.

Both scientists worked independently of each other and received funding in support of their research from the National Institute of Dental and Craniofacial Research (NIDCR). The NIDCR and the National Institutes of Health (NIH) funded Patapoutian's research on nociceptive ion channels and somatosensory receptors for 15 years, while they funded Julius' research on nociceptive pathways and the genetic analysis of nociceptor function for eight years.

The National Institute of Dental and Craniofacial Research (NIDCR)

The mission of the NIDCR is to advance fundamental knowledge about diseases that relate to dental, oral, and craniofacial issues, thereby aiding in the early detection, prevention, and treatment strategies that improve the overall health of individuals and communities.

In funding this research, Rena D'Souza, DDS, MS, Ph.D., director of the NIDCR states, "Their discoveries exemplify why dental, oral, and craniofacial research is so vital to our ever-evolving understanding of the human body. This research ultimately shed light on how our bodies sense the environment around us."

According to the NIDCR, the discovery of these ion channels provides a better understanding of pain and proprioception, and therefore aids in recognizing therapeutic targets. D'Souza suggests this research can provide greater insight into how our bodies process external stimuli, which can be useful in the understanding of temporomandibular joint disorders and mechanical loading in the teeth and jaws, for example.

As humans, our ability to sense the world around us is essential for survival. Integral to our daily life, we're remarkably reliant on our sense of touch and ability to interpret hot and cold. But how, exactly, are these nerve impulses initiated and interpreted? The Nobel Assembly at Karolinska Institutet awarded this year's Nobel Prize in Physiology or Medicine to David Julius and Ardem Patapoutian for answering this question and furthering our understanding of the intricate interactions between our senses and our environment.

Using capsaicin, a chili pepper extract with analgesic properties that induce a burning sensation, David Julius successfully identified a nerve-ending sensor of the skin that reacts to heat. Ardem Patapoutian discovered a previously unknown class of sensors by using pressure-sensitive cells able to respond to stimuli in the internal organs and skin.

How is Pain Recognized?

Prior to this research, the fundamental question on this issue remained: How does the nervous system convert temperature and mechanical stimuli into electrical impulses?

Nobel laureate David Julius began trying to answer that question in the late 1990s. By analyzing the chemical compounds found in capsaicin, he aimed to discover exactly how they worked. With the aid of his co-workers at UC San Francisco performing extensive research, Julius finally found the one gene that makes cells sensitive to capsaicin.

Under continued research, Julius revealed a gene that was encoded with a previously unknown ion channel protein. This newly identified capsaicin receptor was named TRPV1. Upon investigating the protein's heat response, Julius made a remarkable discovery: He found a heat-sensing receptor that activated at temperatures that are sensed as pain.

While Julius was busy in San Francisco discovering the processes for temperature sensation, his fellow 2021 Nobel Prize laureate Ardem Patapoutian was trying to answer the question of touch and pressure sensation down the coast in La Jolla, CA, at Scripps Research. Mechanical sensors had already been found in bacteria, but researchers were still trying to nail down the mechanisms of touch in vertebrates.

After extensive research, Patapoutian and his co-workers discovered that by silencing a single gene it rendered cells insensitive to poking. Upon discovery of this novel mechanosensitive ion channel, it was named Piezo1, after the Greek word for pressure (í; píesi). Like Piezo1, a second gene was then discovered and therefore named Piezo2. This second discovery revealed that sensory neurons expressed high levels of Piezo2. Furthermore, it was determined that Piezo1 and Piezo2 are ion channels activated by direct pressure on cell membranes.

Patapoutian's discovery led to a series of papers by himself and others on the topic of proprioception, which is the body's awareness of position and motion. Moreover, it was confirmed that the Piezo2 ion channel is responsible for sensing touch and proprioception. Piezo1 and Piezo2 channels were also shown to regulate important pressure-sensitive processes in the human body, including respiration, blood pressure, and bladder control.

The NIDCR already sees implications this research will have in oral health care.

Making Sense of Our Senses

This year's Nobel Prize laureates, David Julius and Ardem Patapoutian, made remarkable discoveries in finding TRPV1, TRPM8, Piezo1, and Piezo2. Through decades of laborious research, time, and dedication, it's now better understood how temperature and touch are initiated and perceived from stimuli. The TRP channels control the ability to perceive temperature, while the Piezo2 channel facilitates our body's awareness of movement and position. Furthermore, the TRP and Piezo channels contribute to vital physiological functions in our bodies that are reliant on being able to sense temperature and pressure.

These findings are seen as breakthrough discoveries in medicine and have led to a greater understanding of how the human nervous system interprets temperature and stimuli. It's the hope of the NIDCR and NIH that these discoveries will also advance the recognition, diagnosis, and treatment of oral health diseases and pain management for patients in dentistry and beyond.

Author: With over 11 years as a published journalist, editor, and writer Genni Burkhart's career has spanned politics, healthcare, law, business finance, and news. She resides on the western shores of the Puget Sound where she works as the Editor in Chief at DOCS Education out of Seattle, WA. 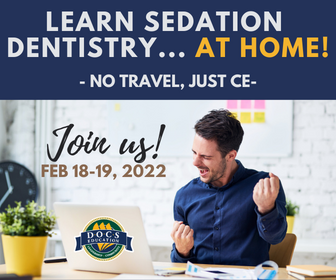